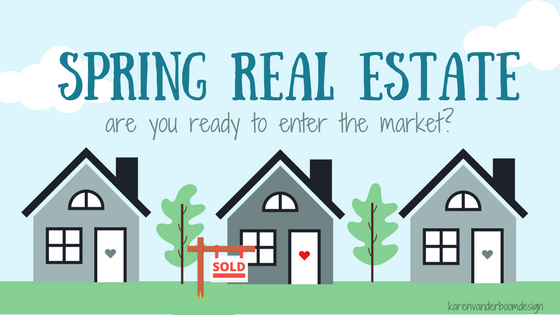 Year after year, spring is the busiest season of real estate. After all, warmer weather and longer days inherently give people the inspiration for change. Spring flowers and budding greenery make the perfect backdrop for marketing a home. And there are a vast number of buyers and sellers who, working within the confines of a school calendar, want to purchase and move prior to the fall.

In addition to these expected seasonal factors, interest rates have slowly been rising over the past few months. Though still low (currently just over 4%) – many buyers are motivated to purchase relatively soon in case rates continue to rise. Thus, spring 2018 is looking to be an especially active quarter.

If you’ve been thinking of buying or selling, now is the time to start researching your opportunities and making preparations for the upcoming spring market. From home repairs to staging to loan prequalification, there are numerous steps you can take to get a head start on a fast market. Not sure where to start? I’m here to help! Whether you are committed to buying or selling this spring or just beginning to consider a move, I would love to talk to you more.

Call me today to schedule a free market analysis of your home or to discuss loan possibilities – together we can decide if the spring market is the best move for you! 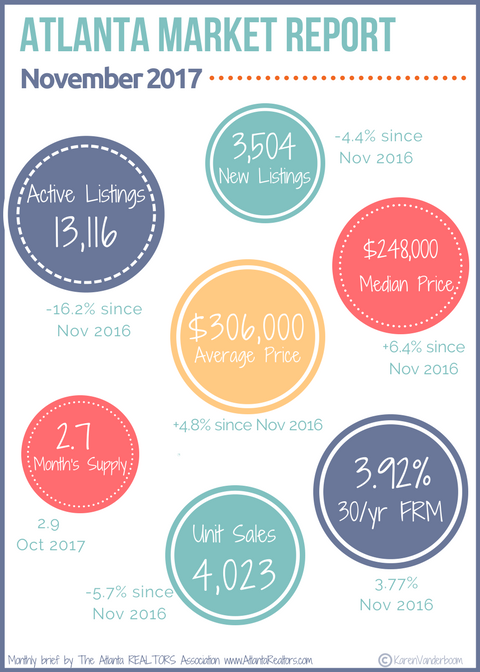 Demand: November residential sales were at 4,023, a decrease of 5.7% from the previous year.

Price: Average and median sales prices continue to gain traction and outpace 2016’s figures, with positive gains. The median sales price in November was $248,000, an increase of 6.4% from last November. The average sales price was $306,000, up 4.8% from the previous year.

A Word from 2017 Atlanta REALTORS® President Bill Rawlings: “The Atlanta market had fewer sales than a year ago, largely due to lower levels of inventory for prospective buyers. These inventory levels are also keeping prices higher during these fall and winter months. The seasonal decline in inventory we are seeing will likely continue to add to competitive conditions through the winter.”

The data in this report was compiled by First Multiple Listing Service (FMLS). For more information on details of this month’s report, please contact the Association at 404.250.0051.

*Each month, the numbers reported for the previous month are updated to reflect additional recordings. 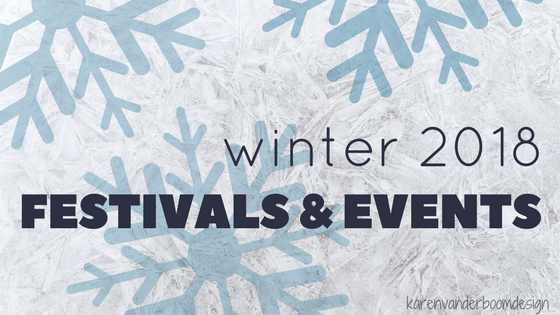 The holidays are over, but the winter fun is just beginning. Take a look at some of the seasonal events taking place in Atlanta this January and February.

Aquafina Rink at Park Tavern: Park Tavern has a beautiful skating rink that is not only tented, but also heated! Tickets are $15 – $20 with no limit on skate time and free for spectators.  Though open 7-days a week until February 19th, the rink does close for private events, so it is best to call before heading out.

Snow Mountain: Stone Mountain’s winter fun-park is the best way to experience a snow day without having to leave Metro Atlanta. A 400 ft. tubing hill is their main attraction in addition to a snow play area. Snow Mountain is open on select dates through February 25th (mainly weekends, with a few weekday offerings) and reservations are highly recommended.

Atlanta Winter Beer Festival: If you’re a beer and cider fan, then this is the winter festival for you! Held at Atlantic Station on Saturday, January 27th, the event will feature over 150 beers with live music, food trucks, and heated tents.

Battle of the Bands: At this event, halftime is game time! The top marching bands of historically black colleges and universities (HBCUs) will perform at 1 pm on Saturday, January 27th at the Mercedes-Benz Stadium.

Monster Jam: And last (but certainly not least), the Mercedes-Benz Stadium will be hosting the Monster Jam for the first time on February 24th and 25th.

Is Your Home Cold Weather Ready? 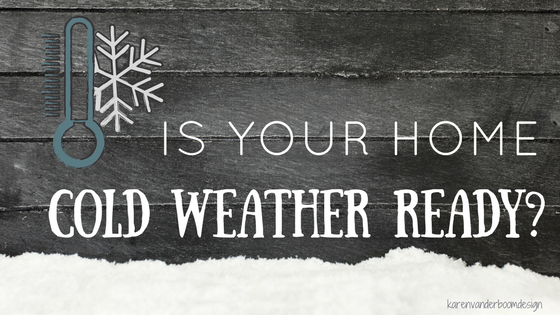 After experiencing the coldest New Year’s Day in over 40 years, it looks like Atlanta will be in for a chilly winter! To ensure your home stays safe in the snow and below-freezing temperatures, I’ve compiled a list of winter precautions and preparations.

I hope you – and your home – have a wonderful winter season. Stay warm!

1. Clean Gutters: Blocked gutters prevent snow and ice from properly draining away from the roof and house foundation. Instead, the water may seep through your roof or into your home’s foundation, causing water and flood damage.

2. Seal Drafts: Block cold air from entering your home (and warm air from escaping) by sealing any gaps around doors or windows. Inspect your basement, crawlspace and attic for any areas of heat loss and add insulation as needed.

3. Inspect Chimney: A dirty chimney is not only a fire risk, but also a health hazard due to dangerous gases and smoke. Therefore, it is recommended that chimneys be inspected annually and professionally cleaned as necessary.

4. Monitor Pipes: Outside faucets need to be drained and shut off before temperatures reach freezing. On especially cold nights, open cabinet doors to allow warm air to reach the pipes underneath and allow the faucets to drip.

5. Prepare for Extremes: Especially in Georgia, there’s the risk that a snow/ice storm could shut down the roads for a few days. To prevent fighting the crowds at the local grocery store, keep a designated supply of non-perishable food and water, candles, batteries, portable phone chargers and radios.

And, while you’re preparing your home for the cold weather, don’t forget about your car. In addition to your routine car emergency kit, keep your gas tank at least half full and travel with extra water, blankets, cat litter, ice scrapper, cell phone charger, and flares.